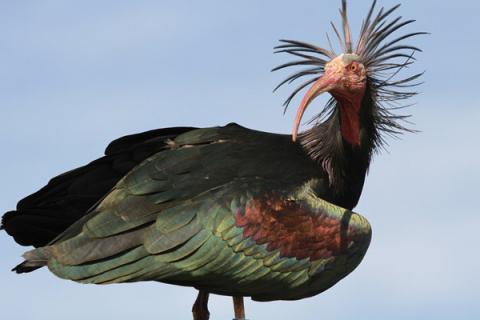 In September 2016 Italian prosecutors won a precedent case concerning illegal killing of Northern Bald Ibis (Geronticus eremita).  This is of interest particularly for the collaborative approach to evidence gathering and successful prosecution, its wider context and the possibility of follow-on action it raises.

The Northern Bald Ibis is one of the most endangered bird species worldwide.  It is extinct throughout most of its former European range and elsewhere is classified as critically endangered.  It is the subject of a pioneering European reintroduction programme, co-financed by the EU and managed through the Reason for Hope LIFE project.  This project is attempting to reintroduce young ibis at suitable sites in Germany and to train them to follow traditional migratory routes to overwintering grounds in Italy.

These highly intensive conservation efforts are being undermined by illegal hunting.  This problem affects many migratory species across many areas of Europe but is particularly acute for such an extremely threatened species, where as much as 70% of reintroduced ibis are illegally killed.

However, because the birds wear radio transmitters, the circumstances of their deaths are relatively well know.  In 2014, a cluster of incidents could be narrowed down to a small area of Tuscany and to specific times when the birds were thought to have been shot.  With the aid of the reintroduction project, local hunting associations and others police identified a suspect and Italian prosecutors could bring a case against him in respect of a handful of the illegally shot birds.

In September 2016 the prosecutors secured a conviction.  The defendant was ordered to pay a €2.000 fine, €1.500 costs and forfeit his hunting licences.  The fine was suspended due to mitigating circumstances and, in any event, might be thought to be inadequate in view of the unusually damaging nature of the offences.

However, in addition to criminal sanctions, the court ordered the defendant to compensate the reintroduction project for its losses, which would be quantified in separate civil proceedings.  These are estimated at up to €234.000 for the losses of birds overall, of which perhaps €20.000 can be attributed to the defendant's offences.

ENPE is in contact with the ibis reintroduction project, and with wider initiatives to tackle illegal killing of migratory species in the Mediterranean.  We are providing help and support as appropriate and aim to disseminate to our members further information, case studies and examples of best practice approaches as they arise.